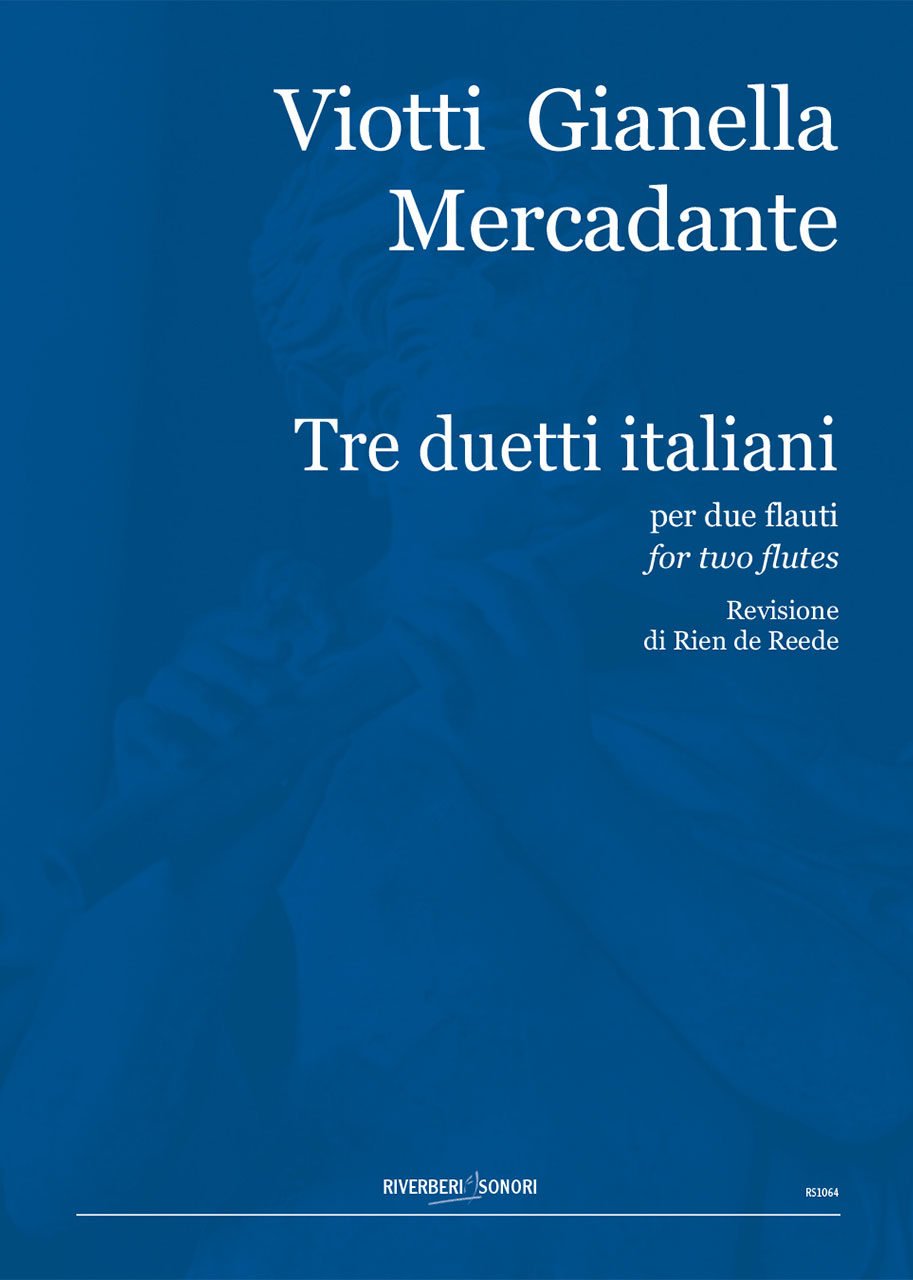 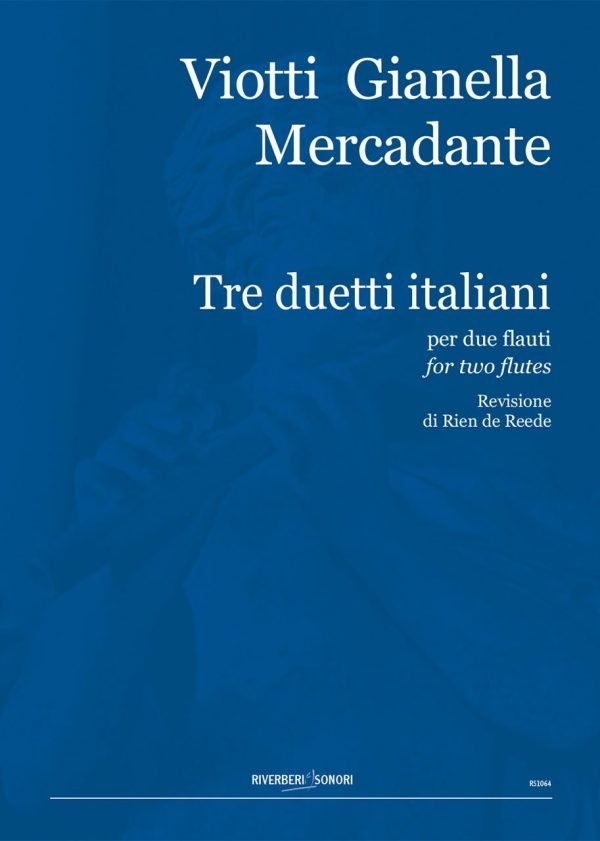 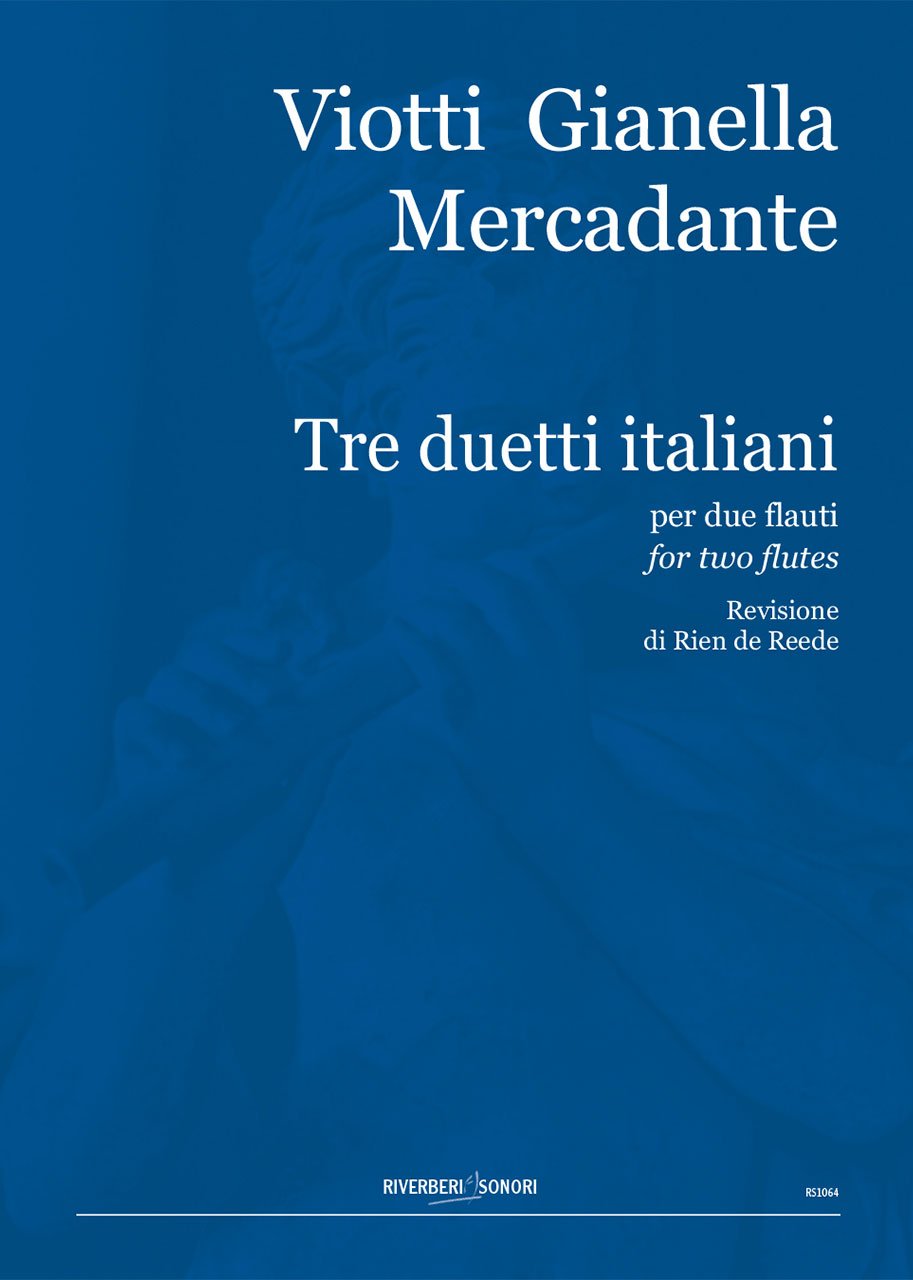 This collection presents three small unpublished masterpieces of Italian authors who boast many flute compositions in their catalog. Awarded in the USA for the best edition of 2007 at the Newly Published Music Competition, it is part of a series of publications for two flutes by Rien de Reede.

Musician (Fontanetto Po 1755 - London 1824); he studied the violin with G. Pugnani. He belonged to the royal orchestra for a few years; then he left Italy for a concert tour with his teacher. After unfortunate theatrical productions in Paris, he passed (1792) to London, acclaimed in the Salomon concerts, and became a conductor at the King's Theater. He moved to Germany (1798-1800) where he dedicated himself to composition. He then returned for a dozen years in England and (1818-21) in Paris, where he was director (1819) of the Opéra and the Théâtre des Italiens. He spent the last three years in England. One of the greatest violinists of all time, he was also a great teacher, and through his students (J. Rode, F. W. Pixis and others) he exercised a lasting influence on the French violin school. As a composer, Viotti is remembered above all for his violin and orchestra concerts which, while respecting the classical school modules, present in the melodic line an evident pre-Romantic inspiration. Vast its production, which includes, among other things, 29 concerts.

He was probably born in Milan in about 1778. Dedicated to the study of the flute, he entered the orchestra of the Teatro alla Scala in Milan in 1790, where he remained for about a decade. Alongside the orchestral activity, Gianella devoted herself to composing, producing two ballets for La Scala (Money does everything and Idante and Asseli, August 1790), both lost. In 1800, he tried his luck moving to Paris; here, in addition to performing as a virtuoso of his instrument, he collaborated with various local orchestras, including that of the Opéra-Comique in the theater of rue de la Victoire. During his stay in Paris he also actively dedicated himself to the composition. The only operatic commitment was born from the collaboration with Charles-François Dumonchau for the creation of the work in one deed L'officier cosaque (Paris, théâtre de la Porte de Saint-Martin, 8 April 1803), on the text of Cuvelier and Barouillet . Gianella was, however, mainly renowned as a soloist and composer of flute music: as a testimony to this, in addition to the most famous concerts with orchestra, there is the extensive chamber music production, in which the role of the flute, to which most of the its production, is exploited in all virtuosistic possibilities. He died in Paris around 1817.

Saverio Mercadante (Altamura, 17 September 1795 - Naples, 17 December 1870) was an Italian composer. In 1799 he escaped death thanks to his mother who, during the sacking of the city by the Sanfedists, providentially gave himself away. He was a pupil of Giovanni Furno, Giacomo Tritto and Nicola Antonio Zingarelli in Naples, where he was joined by Vincenzo Bellini and patriot musician Piero Maroncelli. Here he made his debut as a theatrical composer in 1819, at the age of twenty-four, with L'apoteosi d'Ercole. It was established two years later, in 1821, at La Scala in Milan with Elisa and Claudio and, subsequently, his works were represented in major Italian and European centers, in particular in Vienna. After having stayed, from 1827 to 1829, in Spain and Portugal, he was appointed, in 1833, a chapel master at the cathedral of Novara for six years. In 1832 he married Sofia Gambaro, a young Genoese widow with three children, from whom she had three other children: Serafina, Osvino and Saverio. In 1836, at the invitation of Rossini, he went to Paris where, at the Théâtre Italien, he had the brigands represented. For thirty years, from 1840 until his death in 1870, he directed the Naples Conservatory.

Francesco Santucci
14.00€ tax inc.
This site uses cookies, if you give us permission click on "I accept". More Info.