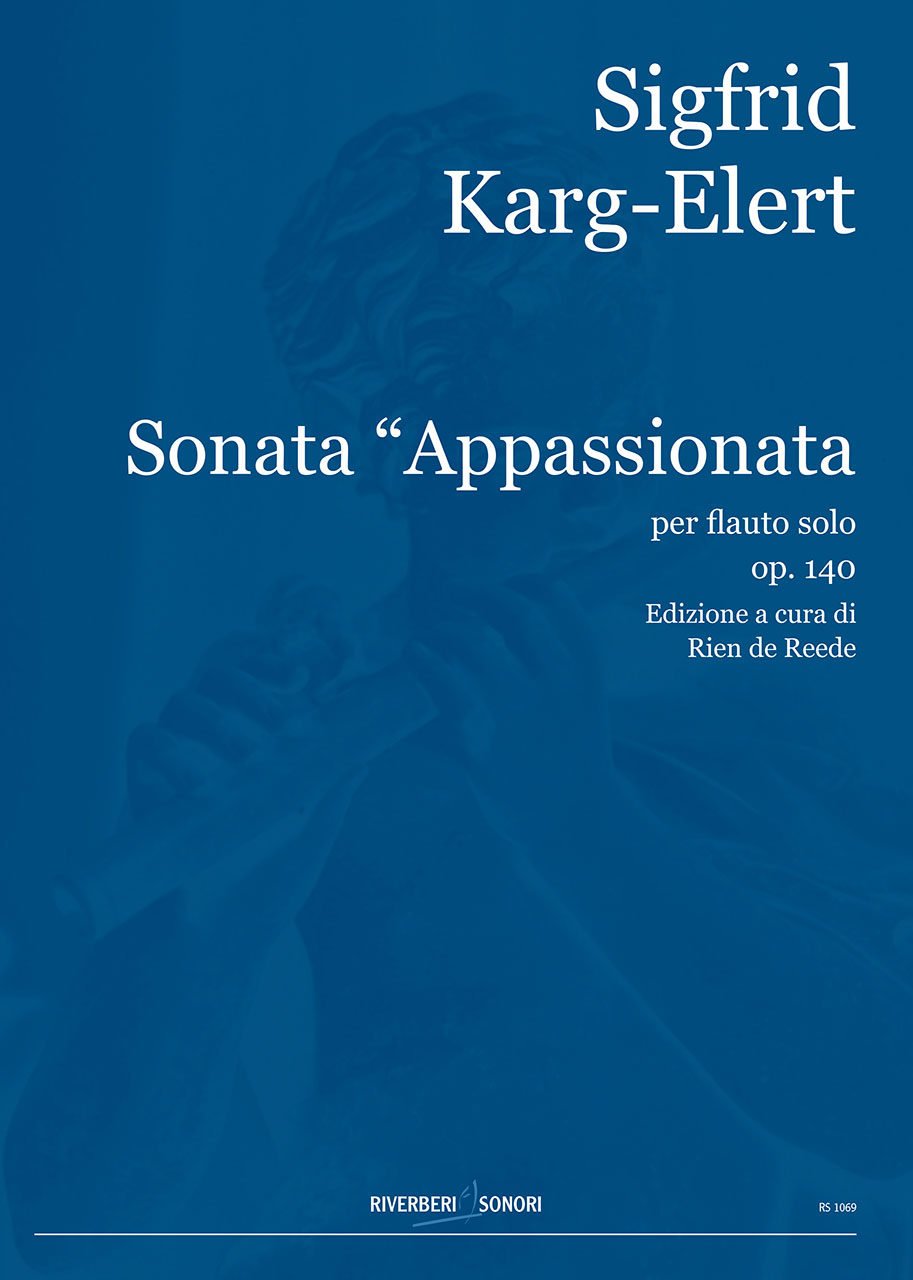 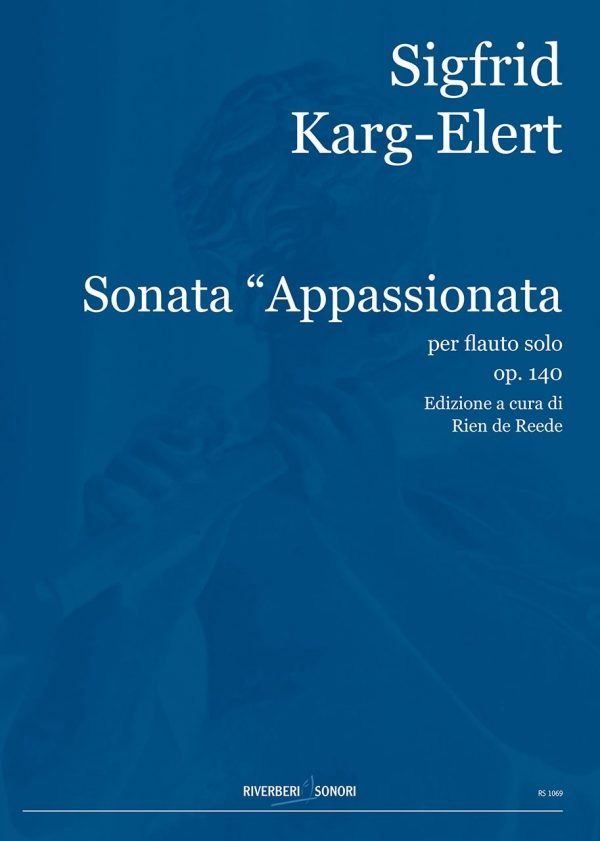 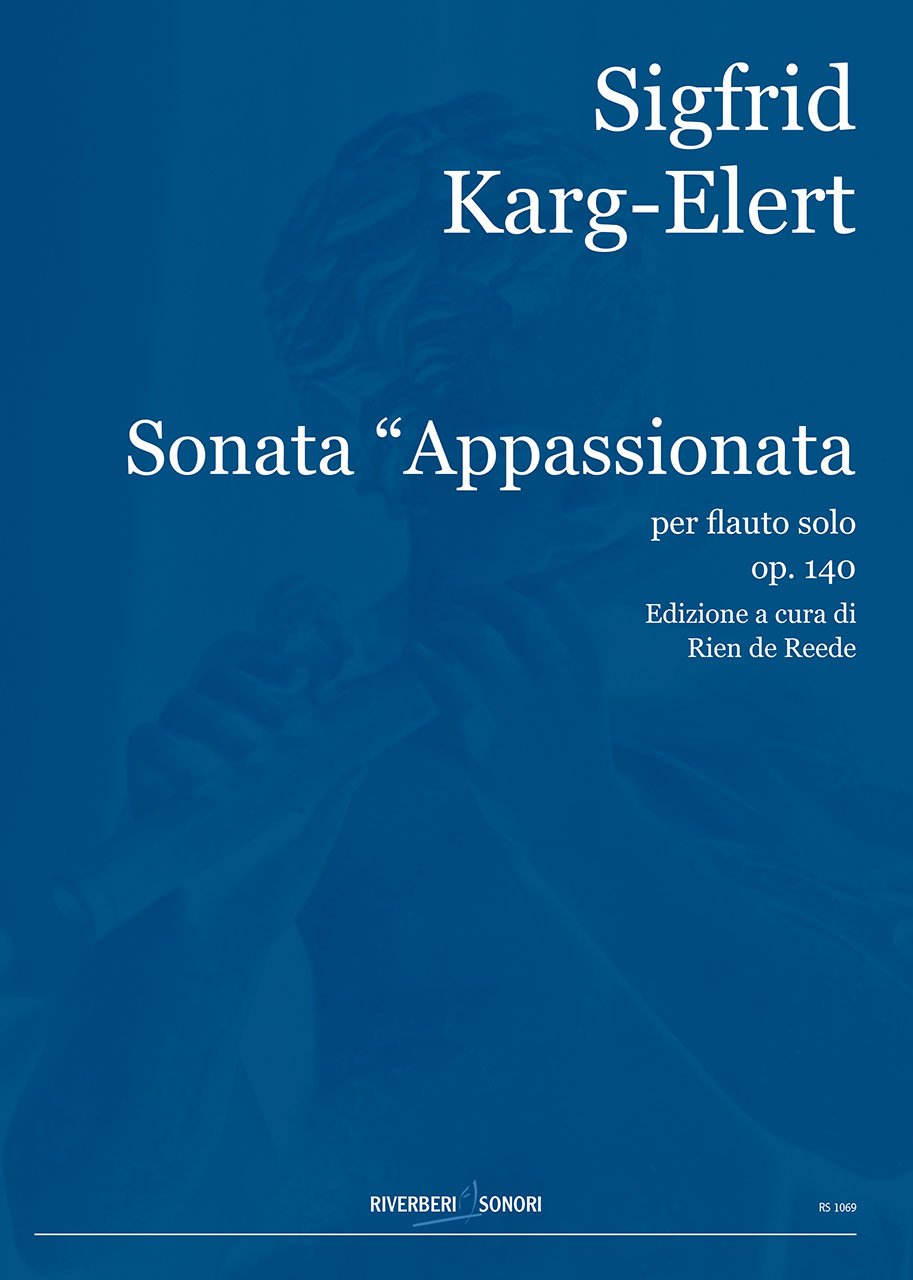 Edition by Rien de Reede.
Karg-Elert was fascinated by the limitless technical possibilities of the Boehm flute and thanks to him the instrument discovered the beginning of a new, fortunate season of important compositions. Among these, surely the Sonata Appassionata for flute only has a first place, an extraordinary and lyrical solo of five minutes with typically late-romantic features.

Sigfrid Karg-Elert (Oberndorf am Neckar, 21 November 1877 - Leipzig, 9 April 1933) was a German composer, teacher and organist. He achieved a certain popularity in the early twentieth century, especially for his choral works, lieder, orchestral music, piano music and compositions for the organ and the harmonium. Born with the name of Siegfried Theodor Karg, he studied at the Conservatory of Leipzig under the guidance of Alfred Reisenauer, a pupil of Franz Liszt, and of Salomon Jadassohn and Carl Reinecke. In 1901 he became a piano professor at the Conservatory of Magdeburg and here he changed his name to Sigfrid Karg-Elert, with a simplified version of his mother's surname, Ehlert. In these years, on the advice of Edvard Grieg he devoted himself to composition, in particular of piano works. In 1904, through the music publisher Carl Simon, he discovered the expressive possibilities of the so-called "art harmonium": from this moment on, the music written for this instrument will become a preponderant part of his catalog of works, as well as the repertoire for Kunstharmonium.
In 1919, he became professor of music theory and composition at the Leipzig Conservatory, succeeding Max Reger. [1]
While in Great Britain and the United States his works became very popular, in Germany he was opposed by much of the music critics and composers like Reger himself. In the 1920s and 1930s, Karg-Elert increasingly turned to the international scene, partly because of the rise of National Socialism. From 5 to 17 May 1930 the Londoner Organ Music Society organizes a "Karg-Elert Festival" in London: 10 different organ recitals are presented in his honor, to which he is present as a guest composer. Moreover, in 1932 he was invited to perform as a concert organist of 22 concerts in the United States: despite being ill with diabetes, he decided to leave to present some of his latest compositions (such as the Introduction, Passacaglia and Fuga on the name BACH) alongside works by ancient masters. But the tour turns out to be a failure: organist of limited technical skills, Karg-Elert is lost in front of the complex American instruments and ends up disappointing the public receiving bad reviews from critics. This extreme blow has catastrophic consequences on his state of health.
A man who has always been very tormented and singular, he dies the following year, just 55 years old.

Be the first to review “Sonata Appassionata for flute solo, op. 140” Cancel reply

The flute for beginners vol.2

Raymond Guiot
25.00€ tax inc.
This site uses cookies, if you give us permission click on "I accept". More Info.